Population or community ecology is the study of how population sizes change as species interact both with each other and with their environment through time.  Whilst there is often a great deal of information about the individual animals or plants in the system, the complex interactions between them means that it is often difficult to understand the system as a whole.

A good example of this is the ecological system that is home to the blue crab in Chesapeake Bay, the western Atlantic’s largest estuary.  The blue crab is the most valuable commercial species in Chesapeake Bay, but there is concern over its long-term survival because of the increasing level of fragmentation of its natural seagrass habitat.  The blue crab uses the seagrass to hide from predators and the fear is that as the seagrass bed becomes divided into smaller clusters they will offer weaker protection and lead to higher mortality.  Increased algae growth (caused by fertiliser run-off and sewage discharge) as well as water movement from natural disturbances (for example, storms and sea-level rise) and human actions (such as boating and ﬁshing) all contribute to the fragmentation of seagrass habitats.    Understanding at what point the increased level of fragmentation begins to significantly influence blue crab survival is critical for the long term management of the habitat and therefore the crabs themselves.  This understanding can only come from the development of some form of model for this ecological system that accounts for the complex interactions between the different inhabitants and the habitat itself.

Individual based models (IBMs) can be used to model the complex systems that often arise in ecology.  IBMs are computer simulations of environments in which individuals are modelled explicitly, and the properties of the system arise from the interactions of the individuals (with their environment and with each other) through time.  Modelling individuals rather than the ecological system as a whole directly, allows us to consider the variability amongst individuals, to understand how they interact locally and whether they adapt to their surroundings, as well as examining complete life cycles.

K. Hovel and H. Regan developed an IBM to investigate how the outcomes of interactions between predators and prey in seagrass landscapes are influenced by the fragmentation and loss of seagrass habitat.  In the model “prey (juvenile blue crabs) are eaten by mesopredators (larger blue crabs) which in turn are eaten by top-level predators (e.g., large ﬁsh)”.  Within the simulation, the individuals are situated in a discrete, spatial representation of their habitat – a grid that is made up of cells, each representing 1m2 of sea floor.  Each of these cells has one of three habitat types (seagrass patch interior, seagrass patch edge or unvegetated sediment), which capture different levels of seagrass fragmentation and these are used to build-up different seagrass landscapes. Different movement and predation behaviours for the prey, mesopredators and predators are modelled by assigning them rates at which they move together with the probability of moving to a particular neighbouring cell, perhaps at random or “hunting”/“escaping” a prey/predator. The number of juve 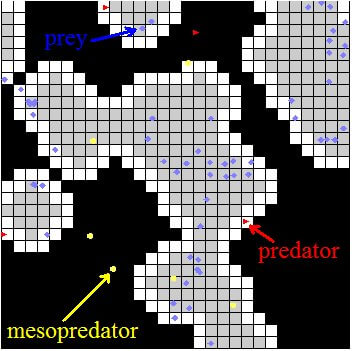 The figure on the right shows a visualisation from the model including the prey, predators and mesopredators as well as the extent of the seagrass habitat (grey and white cells).  The model can be used to perform various simulations of different scenarios to investigate the resulting progression of the populations observed.  For example, we may want to consider the effect of varying prey mobility and the behaviour of both the prey and predators, or how different levels of seagrass fragmentation and loss might affect the individuals and their resulting populations.  If we were to run simulations with a very sparse landscape of seagrass “islands”, we may not be surprised to see the rapid demise of the blue crabs as the larger ones would spend more of their time in open areas and vulnerable to predators, and the juveniles would have little seagrass to hide in. Similarly, with a large continuous expanse of seagrass habitat, the crabs might never need to leave that protective environment and would have more room to escape from predation.  The IBM allows us to determine at precisely what level of fragmentation the increased vulnerability of individual crabs to predation begins to directly affect the likely long-term survival of the population as a whole.

Describing and understanding ecological systems is a key step in being able to plan conservation strategies.  Seagrass is declining worldwide; there are a number of associations dedicated to their management and protection (for example, the World Seagrass Association).  IBM’s like that developed by Hovel and Regan help us to understand how these changes will affect commercial fishing of species such as the blue crab.  By identifying the point at which the level of seagrass fragmentation would likely become irreparably harmful to the blue crab population, these models help to identify strategies for the conservation and rebuilding of sustainable populations going forward to ensure their long-term survival.