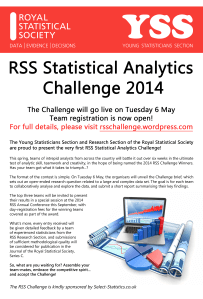 At the beginning of May the first RSS Statistical Analytics Challenge 2014 was announced, a competition set by the Young Statisticians and Research Sections of the Royal Statistical Society and sponsored by Select. Teams of analysts from across the country entered the challenge, which involved analysing brain imagining data from MRI scans. MRI studies amass huge amounts of data, and the objective of the challenge was for teams to identify some fascinating new insights using novel statistical techniques.

Having submitted a short report summarising their key findings and recommendations, the winning teams were announced at the beginning of August. Congratulations to the overall winners, Team UCLStats and the highly commended runner-up, Team SODA from the University of Nottingham. As part of the prize, these teams were both invited to present their findings at the YSS session of the RSS 2014 Conference which took place this month in Sheffield.

If you’re interested in finding out more about the winning entries, videos of the presentations are now available online.

Well done once again to both the winning teams and all those who took part!