The first joint ExIStA and RSS South West Local Group seminar took place at the University of Exeter on Monday 19th November with invited speaker Professor David Spiegelhalter.  David, the Winton Professor for the Public Understanding of Risk at the University of Cambridge, is not only a well-known figure in the statistical world, but often appears in the wider media, including as a guest columnist in the Times and on Radio 4’s More or Less series.  Just last month he could be seen on BBC4 in his documentary ‘Tails You Win – The Science of Chance’, described by its makers as “a combination of wit and wisdom, augmented-reality graphics and gleeful nerdery!”, not to mention being a recent contestant on the BBC’s Winter Wipeout!

Much of David’s work aims to help improve the way that uncertainty and risk are discussed in society, and in his talk he introduced two measures of risk that help to describe both the acute and chronic health risks that we all face: the regularly used micromort and the new microlife.  The micromort represents a 1-in-a-million chance of dying and, as David described, is useful as “a friendly unit of deadly risk”!  To put this measure into context, with 50 people dying of non-natural causes in England and Wales per day and a population of approximately 50 million, just by living, we experience one micromort every day (on average).  Using micromorts to describe deadly or acute risks is advantageous for, not only are they easy to understand and communicate, but they can be compared across different activities.  For example, if we were to consider the risks associated with different modes of transport, we would find that for every one micromort you can drive 250 miles in a car, but only 6 miles on a motorbike. 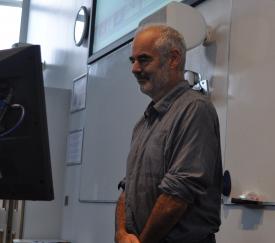 But what about the risks that we take that don’t kill you straight away, such as smoking, drinking, eating badly and so on?   David introduced a new measure of risk in his presentation that he has called the microlife.  A microlife is defined as 30 minutes of your life expectancy and makes chronic risks comparable by showing how much life we lose on average when we’re exposed to them.  Examples of everyday activities that cost us a microlife include eating red meat, smoking two cigarettes and drinking alcohol (although the first drink gains you a microlife, so there is only an overall loss of microlives after the second drink!).   Interestingly, David pointed out that microlives are also a metaphor for the ‘speed of ageing’ since those of us who participate in activities that accumulate a greater number of microlives (smoking, drinking and eating unhealthily) are speeding through our lives faster than those who do not.

In the final section of his talk, David discussed the communication of uncertainty and the importance of acknowledging deeper uncertainties (or the ‘unknown unknowns’).  This issue is of vital importance in science and this couldn’t be demonstrated better than by the recent controversial trial of the L’Aquila scientists.  David finished a fascinating talk on this note, which prompted much discussion from the audience on how deeper uncertainties could be assessed and communicated and whether microlifes could be applied to other risks such as climate change.