StepChange are the UK’s leading debt charity and they help over 500,000 people a year across the UK to overcome their debt problems. As part of their Action Plan on Problem Debt, aimed at raising awareness of the issues surrounding debt in the UK, StepChange were looking to conduct some research into the possible relationship between savings and debt.

Select were asked to investigate the potential statistical link between cash savings and problem debt. In particular, we were asked to estimate: the levels of savings necessary to help households stay out of problem debt; the number of households without this adequate level of saving; and how much savings levels needed to be boosted, on average, in order to prevent or minimise problem debt.

Our analysis focused on data from the Wealth and Assets Survey (WAS), a detailed, longitudinal survey of private households in Great Britain conducted by the Social Survey Division of the Office for National Statistics. The WAS provides considerable information (collected via face-to-face interviews) on the wealth of households and individuals, including the level, distribution, nature and type of assets (including savings) possessed and debts of all types as well as attitudes to financial planning, saving and financial advice. Data from the most recent wave of the WAS, collected between July 2010 and June 2012, were obtained from the UK Data Archive.

The self-reported “heavy burden” from non-mortgage debt supplied in the WAS data was used to define problem debt. A multiple logistic regression model was fitted to explore the potential link between savings and household problem debt, with presence/absence of problem debt as the dependent variable. This uses a logistic transformation to express the probability of problem debt as a linear function of the independent variables (i.e., potential risk factors). This allows us to investigate the potential effect of cash and accessible savings on the risk of having problem debt and also to account for (and estimate the effects of) potential risk factors, including individual and attitudinal variables considered to be associated with over-indebtedness (based upon background research provided by StepChange).

Figure 1, below, shows how the model predicts the effect of cash savings on the odds of having problem debt for a range of household regular incomes. Clearly, the protective effect of savings is higher for households with a lower regular income. 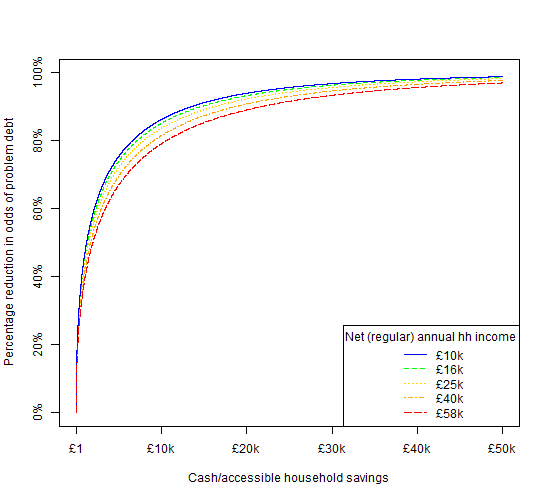 Figure 1: Plot of the modelled relationship between cash savings and problem debt for a range of household net (regular) annual incomes.

Applying the model, we were able to predict the probability of problem debt for all households within the WAS dataset. The WAS data also comes with cross-sectional analysis weights that can be used to account for both the survey’s sampling design and patterns of non-response. Using these weights we were able to extrapolate from the predicted probabilities of problem debt for households included within the survey to obtain predictions for the number of households at risk of problem debt across the whole of Great Britain. We were also able to explore different scenarios to determine the effect of increasing household cash savings on the predicted national levels of problem debt.

Our work helped StepChange to raise awareness of the issues surrounding debt in the UK, to influence Government policy and to help families at risk of problem debt. The Action Plan, which also drew upon economic forecasting from the Centre for Economics and Business Research was released in January 2015 ahead of the General Election and sought to challenge the next Government to ensure that families come out of the next five years more resilient and better able to weather shocks to their finances.

For more details on StepChange’s Action Plan and to download our report “Savings and Problem Debt”, please visit the StepChange web site.

Select carried out detailed analysis for StepChange Debt Charity on the statistical relationship between cash savings and avoiding problem debt. The work done by Select was excellent. It went above and beyond to identify the key issues we sought to investigate and ensure our research needs were fulfilled. I was particularly impressed with the extra background on the problem done by Select, which we hadn’t specified in the original brief. I would highly recommend the organisation and their work.Joseph Surtees – Senior Public Policy Advocate, StepChange Debt Charity