At the start of the year, the Chief Medical Officer announced new guidelines for alcohol consumption. The main headline message was that men and women should drink no more than 14 units of alcohol a week in order to keep their health risks low (the equivalent of six pints of average strength beer or seven glasses of wine).

So what’s changed since the last guidelines that were released in 1995? Previously, women were advised to drink no more than 2-3 units per day and men no more than 3-4. Under the previous guidelines, men could consume up to 28 units per week. Another difference is that adults are now advised to spread the 14 units evenly over 3 days or more since ‘if you have one or two heavy drinking sessions, you increase your risks of death from long term illnesses and from accidents and injuries’.

The new guidelines are based on work carried out by the Sheffield University using their Sheffield Alcohol Policy Model. You can find out more details about the methods from the Chief Medical Officer’s full report and Sheffield University’s report. To summarise, the Sheffield group have used a simulation model to derive estimates of alcohol consumption and the associated risk (both chronic and acute) of alcohol-related conditions. The model requires the following inputs:

The work put into creating the new guideline is thorough and interesting, but the communication of the results has been identified by the Royal Statistical Society (RSS) as concerning. In a recent letter written to the Secretary of State for Health, Jeremy Hunt, the RSS set out why they were concerned.

Using the information from the full report, the RSS produced the figure below that illustrated the chance of dying from an alcohol-related condition per unit of alcohol every day. From this figure, the RSS concluded: 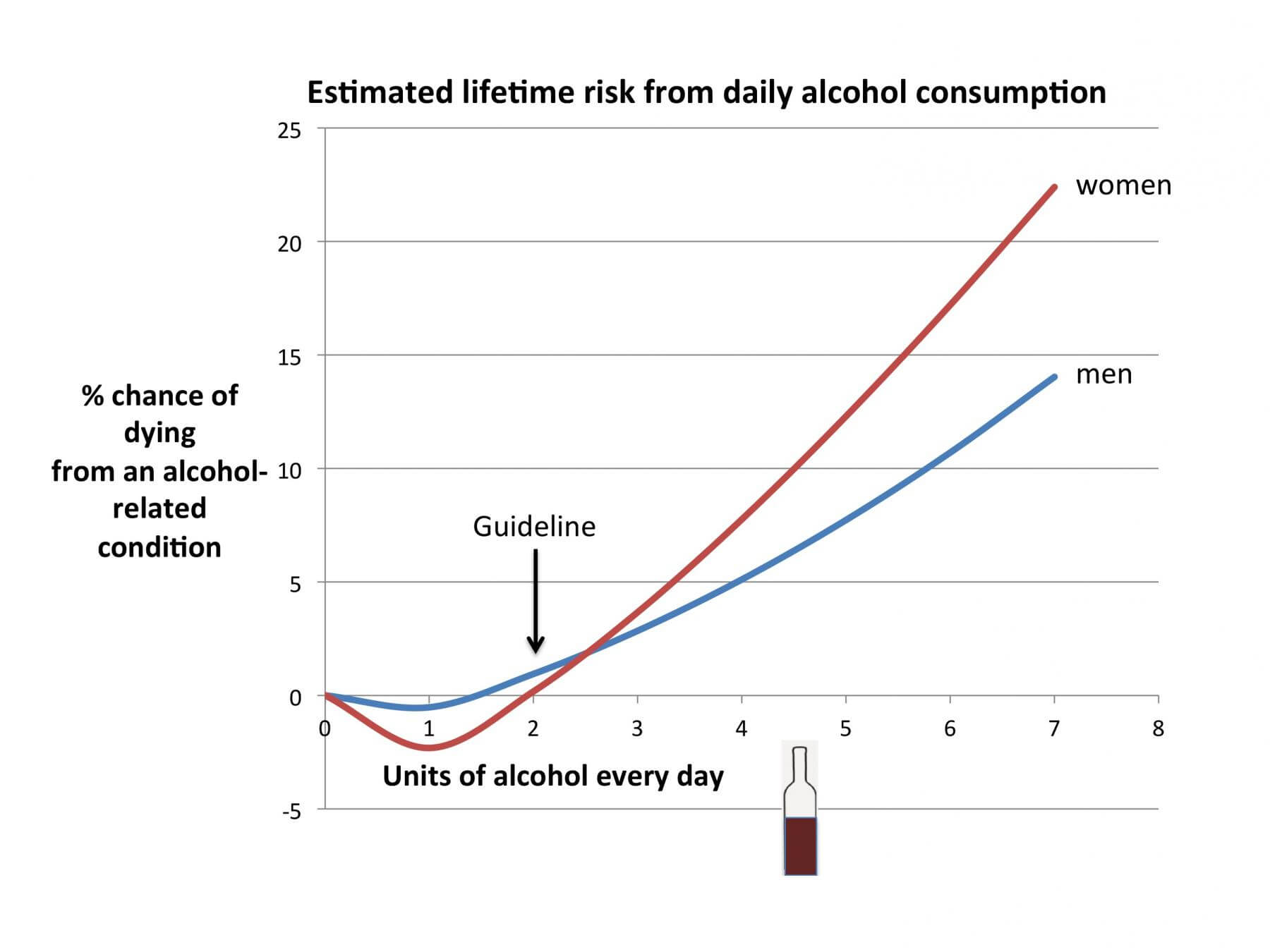 The issue raised by the RSS was that the communication of the guidelines from the Department of Health did not reflect the evidence above. For example, there was a downplaying of the benefits of alcohol as illustrated in this BBC news article which quotes the guidelines as stating “There is no justification for recommending drinking on health grounds – nor for starting drinking for health reasons”. There was also concern at how prescriptive the guidelines are particularly saying that men ‘should’ drink less than 14 units. The guidelines are there to provide the public with evidence of the risks of alcohol so that they can make an informed choice and being so prescriptive could, in fact, mean that the public are less likely to be perceptive to the new guidelines. This issue was picked up by the press where the government was accused of producing nanny-state guidelines (see, for example, this article in The Telegraph).

The controversy of these communications was particularly relevant since one of the Expert Group’s principles was “People have a right to accurate information and clear advice about alcohol and its health risks. There is a responsibility on Government to ensure this information is provided for citizens in an open way, so they can make informed choices”.

The RSS letter highlighted how important it is to not only produce high quality analyses, but also to ensure that the results from this analysis are communicated clearly and objectively. For another view-point of this topic, we’d recommend David Spiegelhalter’s blog post. The guidelines indicate the consumption of alcohol in a week that keeps health risks low. By ‘low risk’ they mean that there is a less than 1% chance of dying from an alcohol-related condition. To help the public better understand this, David has provided a number of comparisons with a higher level of risk to long-term health such as watching one hour’s TV a day and eating two bacon sandwiches a week (which are used to represent the potential harms of sedentary behaviour and harmful diet). Comparisons such as these may help the public make a more informed choice about how much alcohol they wish to consume.

So how much alcohol is too much? The guidelines are clear in stating that drinking 2-3 units per day at most will keep the risks of alcohol-related health problems low. Ultimately, each individual must balance the various risks with the pleasure they gain from that activity and ultimately make a decision for themselves.