In the run-up to the EU Referendum in 2016, we produced a series of blog posts focusing on what the data collected about the EU can tell us about how being a member state affects the UK. More than two years on, with the fast-approaching deadline of Article 50, we are looking at what has changed since the country voted to leave the European Union. We start by following-up on our EU Migrant Workforce and EU Freedom of Movement posts, with a look at how the migration statistics have changed.

The Migrant Workforce in the UK

The latest release (in February 2019) from the ONS for the UK labour market shows that the number of EU nationals working in the UK is 2.27 million as of October to December 2018, out of a total 32.60 million people aged over 16 in work (7.0%). While this is a slight increase on what was observed in January to March 2016 (at 2.14 million), plotting the data over time (see right-hand plot in Figure 1) there’s an apparent leveling-off of the number of EU nationals employed in the UK. This follows a steady increase over the last 10 years, as noted in our previous blog on migrants in the UK workforce. A similar pattern is also observed for EU born workers (see left-hand plot in Figure 1). 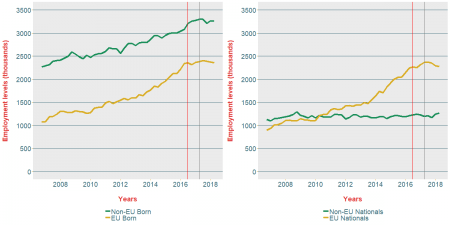 Figure 1: Quarterly employment levels by non-UK country of birth (left) and non-UK nationality (right) split between EU and non-EU for people aged 16 or over (not seasonally adjusted). The red and grey vertical lines indicate the date of the EU referendum (23/06/16) and the date Article 50 was triggered (29/03/17) respectively.

The ONS also notes in their February 2019 release of the October to December 2018 figures, that compared to the same period in the year before (2017), there has been a decrease of 61 thousand EU nationals working in the UK, whereas UK nationals and non-EU nationals have both seen increases of 372 thousand and 130 thousand, respectively. We should however note that though we may see a year-on-year change, since the referendum (indicated by the red vertical line in Figure 1), the number of EU migrants in the workforce has remained broadly consistent compared with the previously increasing trend over the past decade.

The latest figures available from the ONS, as presented above, are for the last quarter of 2018. It’ll be interesting to see if and how the picture changes when the data for 2019 become available and as we reach the deadline of Article 50.

Migration in and out of the UK

More than two years on from our post on EU freedom of movement numbers, Figure 2 shows how migration to and from the UK has changed between 2015 and 2017. The bar chart shows the estimated total number of UK migrants in EU and non-EU countries (green bars) for 2017 and 2015, together with the number of migrants in the UK from EU and non-EU counties (mustard bars) for those years. These figures are taken from the United Nations Population Division from mid-2015 and mid-2017 population estimates of migrant stock, where a migrant is defined as “a person who is living in a country other than his or her country of birth”.

We can see that the largest change has been the decrease in the number of UK migrants outside the EU, while the number of migrants from the UK in the EU has remained at a similar level. In terms of immigration to the UK, we see the opposite: non-EU migrants have reduced in number, whereas the number of EU migrants in the UK has increased. Despite this, we still see that the majority of migrants living in the UK  are from non-EU countries, though between 2015 and 2017 the gap has slightly narrowed.

Due to the time it can take to gather and process data before it becomes available for public use, we do not have the full picture as to the current UK migration statistics and how these may have changed since the EU referendum over two years ago. However, there have clearly been changes in the interim – in particular, it’s interesting to see that the number of EU born workers and EU nationals working in the UK has not continued to increase at the same steady rate as over the previous decade. In an upcoming post, we will look at updating the figures from some of our other blogs in our EU series, including looking at the UK’s trading partners.