The Royal Statistical Society (RSS) has just announced the winners of its annual Statistics of the Year competition.

The winning UK statistic is 58%, which is the percentage of those in the UK in relative poverty who live in a working household. One of the judges, Kelly Beaver of Ipsos MORI said, “This stark statistic really highlights one of the biggest issues facing the UK – in-work poverty. While it could be seen as positive that more people are in work, this figure shows that employment doesn’t necessarily mean an escape from poverty.”

The winning international statistic is 72.6 years. This is the estimated global life expectancy for those born in 2019 and is a new record high.

As with last year’s competition winners, we expect that these winning statistics will attract a lot of media coverage.

One of the key goals of the RSS is for statistics to be used effectively in the public interest, providing evidence for the good of society. And these winning statistics are certainly contributing to public debate. For example, last year the RSS won a ‘Best Campaign on a Shoestring’ award for its competition. It was a very successful campaign, not only raising the profile of the winning statistics themselves, showing how data can increase public awareness of important issues but also highlighting the importance that statistics can play in our lives. 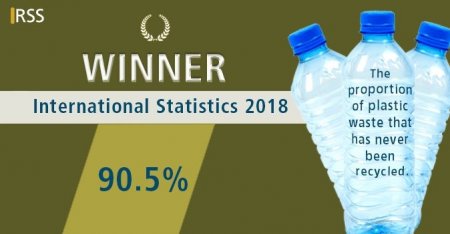 Last year’s winning international statistic was 90.5%. This was “the proportion of plastic waste that has never been recycled“. This is a startling statistic and speaks volumes about the plastic waste we generate.

Earlier this year, the UK government published its own plastic statistic. The sale of single-use plastic bags has decreased by 90% since the introduction of the 5p charge. Reduction in the use of plastic bags is good news about our waste production and for the environment. However, as with many statistics, there is more to the story than initially meets the eye. Channel 4’s FactCheck team point out that the figures in the government’s press release relate only to single use plastic bags and don’t include any data on ‘bags for life’, which are typically studier, and use more plastic.

This illustrates that we shouldn’t always take statistics on face value. That we should look deeper and ask questions. We should think carefully and critically about what they tell us and what they don’t tell us. It is another goal of the RSS for society to be more statistically literate, enabling people to make informed decisions through understanding data, probability and risk. So, when we are faced with statistics, we ask questions such as what are the data they are based on? Were other factors taken into account? Has the way things are counted or calculated changed? Who was included in the sample? Are any claims of causality justified? Could the causal link be the other way around? Or, could there be another external cause or influencing factor?

Of course we can be confident that the winning RSS statistics are accurate and not misleading, and that they have a verifiable source. It is great to see bona fide statistics generating interest. The RSS competition has again been successful in illustrating how data and statistics can draw attention to important issues and contribute to informed debate.